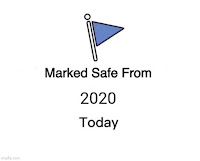 Happy New Year to you all! 2020 was really quite a year, wasn’t it! Unprecedented in so many ways. While New Year’s Eve is never an event I look forward to (because deep down I want to go to one of those huge, swanky 1980s parties that you see in films, like the one in When Harry Met Sally) I actually love the New Year itself, as it’s such a time for reflection and hope for the future.

I found 2020 a mixed bag because on the one hand it was very trying; the stress, the worry about one of us potentially catching Covid and becoming really ill, the home-schooling, the isolation, the worry about the potential effect on my kids’ mental health from being away from school for months, all took a burden on my mental energy. Like many people, I spent the majority of the year feeling like a wrung out dishcloth! I also found working at home while the kids were homeworking really difficult, so hard to concentrate! This meant by the end of the day I was pretty much only good for zombie time in front of the television.

On the other hand, I don’t think I have ever had a year when I have spent so much time feeling grateful for what I have – mine and my family’s continued good health, our lovely home, the fact that I have a job which continued to employ me right through the pandemic and allowed me to stay at home, meaning that I didn’t have to send my children to the hub schools for keyworkers. I was so grateful for the company of my family too, that I wasn’t living alone. Although I became sick and tired of walking in my local area, I also appreciated that we have green space close to where we live to walk around. So, although I found 2020 taxing I also found it a very rewarding year in some ways.

However, one way in which 2020 was entirely dreadful was the effect on my reading. If I am stressed I find it difficult to immerse myself in the written word. My audio reading time was cut overnight to pretty much zero as I used to listen on my commute and during solo lunchtime walks in my work lunch hour, and I lost both of those times. I didn’t get anywhere near my modest reading target for 2020. This is something that I need to rectify in 2021, I want to read more this year.

Although I didn’t get anywhere near as much reading done as I wanted, in terms of quality of reading, I was lucky, because the books I did get to read were good ones! So here’s my pick of the year:

First up was Thaw by Anniina Sjöblom. This is a forced marriage scenario which diverges early on from Pride & Prejudice. Here, Elizabeth marries Mr Darcy after a compromise, which was entirely innocent. It’s told in the form of letters from the new Mrs Darcy to various people, and we see her icy relationship with her husband begin to ‘thaw’. I thought this was a wonderfully charming story, and you can read my 5 star review of it here.

My next 5 star read was 1932: Pride & Prejudice Revisited by Karen M Cox. This was the second edition of the book, and it’s had a number of improvements to an already excellent story. This is a P&P inspired story set in 1932 in Kentucky. Mr Darcy is a well-to-do farmer, and the Bennets have moved to the same town, having fallen on hard times. The thing I probably enjoyed most about this story is Mr Darcy, who first manages to delude himself as to his feelings, and then lets his pride get in the way. You can read my full review of the second edition of1932 here.

Miss Austen by Gill Hornby is a story about Jane Austen’s elder sister Cassandra. This lady, as you may know, undertook an editing of the documents left after Austen’s death. In this story we see Cassandra visiting a family connection in order to try and get hold of letters that Jane would have sent some 20 years ago before they are re-discovered. While finding the letters Cassandra looks back at the events laid out in the letters. I absolutely loved this story, and heartily recommend it as a 5 star read. You can read my review of Miss Austen here.

Now for a complete change of scene – modern times in New England! Sanctuary by Cat Andrews is a Pride & Prejudice flavoured modern read rather than adhering closely to the plot of P&P. It tells the story of two people who have been hurt by life in different ways and have moved to an island off the coast of Maine for a fresh start. Elizabeth Bennet moved there to make a new life after the end of an abusive marriage, Will Darcy and his son Jack are making a new start after the death of Jack’s mother. It’s a story in 3 parts. You can see my 5 star review of the first part of Sanctuary here. I read all three books but haven’t posted reviews of part 2 and 3 yet.

The last of my 5 star reads in 2020 was Amy D’Orazio’s A Wilful Misunderstanding which is a Pride & Prejudice variation. Here Elizabeth and Darcy didn’t get off to a bad start, but instead married after a whirlwind romance. When doubts are planted in Darcy’s mind about his wife’s fidelity a rupture is caused between the couple. When they meet again a few years later there is a lot of lost ground to be made up. This is a story with a good pinch of angst which kept me glued to the page! You can read my review of the story here.

Given that my concentration wasn’t up to much in 2020, the anthology Elizabeth: Obstinate, Headstrong Girl made for nice, small reading chunks. This anthology brought together short stories from some of my favourite Austenesque authors, edited by Christina Boyd. They were all inspired by the heroine of P&P. Some explored variations on Austen’s story, others took Elizabeth to another time. You can read my 4½ star review of the anthology here.

I love a forced marriage scenario, and Being Mrs Darcy by Lucy Marin is a fresh take on it. So often Mr Darcy is madly in love and Elizabeth hates him. Here, the couple meet earlier, when Georgiana visits Ramsgate. Impulsively intervening in a twilight meeting of Georgiana and Mr Wickham, Elizabeth and Mr Darcy are strangers, forced to marry. You can read my 4½ star review here.

With Kara Pleasants’ Disenchanted we find ourselves in a Pride & Prejudice variation set in a world where magic exists! I loved how magic was intertwined with several of the events and characters of P&P, and there are also some mysteries to unravel. This was a 4½ star read for me, and you can read my review here.

In another change of scene, The Jane Austen Society by Natalie Jenner takes us to Chawton, Jane Austen’s last home, just after WWII. In this story, a group of otherwise disparate people are brought together by their love of Austen in order to save her home for future generations. This was a story that really drew me in. You can read my 4½ star review of it here. If you choose to read it and like the audio format, please note that the audio of this book is narrated by Richard Armitage!

The last of my pick of the year is A Timely Elopement by Joana Starnes which picks up at Hunsford Parsonage. Mr Darcy is proposing, but just as Elizabeth is about to reply they are interrupted by the news of an elopement and the story takes a turn. This was a lovely story, which took turns that I wasn’t expecting, always refreshing in the a variation of P&P when you have read so many! I rated this as a 4½ star read and you can read my review here.

So, this is my pick of 2020! I recommend each and every one of these books to you if you haven’t had the pleasure of reading them already.

How was your 2020? Please let me know in the comments! If you’d like to recommend one of your 2020 reads to please do! I have a rough idea of some of the books I’d like to read in 2021, but I am always open to suggestions!

Also, if you're on Goodreads and you'd like to join an Austenesque readers' group, Sophia Rose has set up a group for 2021, the Austen Lovers TBR Challenge 2021. It's a lovely, welcoming group, but you will find your to be read list growing rather than shrinking!