When Mary Met the Colonel by Victoria Kincaid - Review 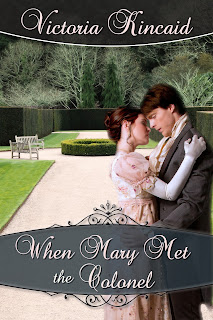 Many years ago, when I first read 'Pride & Prejudice' I really identified with Elizabeth. Although she is more outgoing than me, I felt a kinship with her due to her sense of humour and philosophical attitude, as well as her hasty temper, but like many introverted bookworm types, I also have some level of kinship with Mary. She is definitely an interesting secondary character, and one who has had quite a lonely time of it, with her sisters divided into twosomes. I love to see Mary get a chance to shine in her own right so I was very interested to read this new novella from Victoria Kincaid, ‘When Mary Met the Colonel’.


The story begins at the wedding breakfast of Mr and Mrs Darcy. Colonel Fitzwilliam is besieged – by Kitty and Maria Lucas, who are very impressed with a man in regimentals. The colonel seizes a chance to escape:


‘Rather than respond, Fitz plunged into the crowd. His only hope lay in speed; if he slowed his pace, the enemy would be upon him immediately. The French should hire the two girls as scouts; they had an uncanny knack for spotting red coats.’

Colonel Fitzwilliam here is a man who needs to marry for money, because he only has the money he makes in the army to live on. Therefore to support a wife, she’d need to come with a dowry. He need not marry at all, but he reflects that he would like to find somebody who he can love, not the type of lady who usually seems interested in him, or rather the attraction of his uniform.

He escapes out to the garden, where he stumbles upon the new Miss Bennet, formerly Miss Mary Bennet (you can read an excerpt of their first meeting here). Here the Colonel is surprised by finding a more serious lady than he is used to meeting, and one who is extremely interested in military strategy and the wider impact that the war will have on the future of the country. Mary has the unusual experience of meeting somebody who is interested in her, who takes her seriously and who appears not only to value her abilities but who also seems determined to make her value herself more highly too.

I have always felt that one of Mary’s big flaws was that she took herself too seriously and didn’t have much of a sense of humour – here those flaws have been largely removed, but it’s unsuspected by most of her family, because she is hiding her true self.


‘How was it that even Miss Bennet’s own sister did not know of her true cleverness? The poor woman was even more sadly misunderstood than he had first thought.’

After a promising beginning Mary and the Colonel have to part ways as he goes off to active duty in the war, but each has left an impact on the other. Mary’s self-confidence is boosted, and she begins to flower. Their paths will cross again, but can obstacles of wealth, health and eligible suitors be overcome?

I thought this novella was excellent, and I really enjoyed it. I liked that Mary, from the experience of being made to feel attractive and valued, starts to put some value on herself. One touch that I particularly liked was that one of Uncle Phillips’ clerks had asked permission to court Mary and that she had asked her father to decline this; in Jane Austen’s letters she said that Mary married her Uncle’s clerk (presumably a marriage of affection), but here Mary finds the clerk unattractive and she has the self-confidence not to accept the first offer that comes her way from the belief that it might be the only offer she ever receives.

I found Mary’s personality in this story very likeable. Although she has serious interests she also has a good sense of humour and has some very amusing disconcerting thoughts. She is a straightforward person who doesn’t care for what she perceives to be empty flattery; when she begins to dress in a more flattering way she enjoys the novelty of the additional attention it brings, even while she doesn’t value it because it’s based on surface appearance rather than anything of more substance. I enjoyed watching Mary gain the confidence to start to direct the course of her life.

I did have a couple of quibbles. Darcy’s financial generosity to the Bennet family seemed a little too generous for me. The second thing relates to how quickly you can move on a leg that hasn’t borne weight for weeks! In my experience, once the leg is able to bear weight it takes a good few weeks before it's physically possible to move at any kind of speed at all and the recovery seemed a little too quick. However, I was willing to suspend my disbelief at these because I was enjoying the romance so much.

Since this is a novella rather than a novel it’s a quick read. Although I felt the story could perhaps have been a little longer it didn’t feel rushed at novella length and it’s a wonderfully romantic read. There is a lot of romance in the idea of two people who care for each other but who are divided, especially when neither has an indication that their affection is returned... sigh! I’d recommend this book and I’d rate it at 4½ stars.

*I was provided an ebook of this novella by the author for my honest review.

As you may have seen earlier this week, author Victoria Kincaid stopped by with an excerpt from ‘When Mary Met the Colonel’ plus an insight into what prompted her to write this story. Victoria is giving away a kindle copy to a commenter on her guest post, and if you comment on this review post you can get a bonus entry. The giveaway is open to international entrants and closes at the end of the day on Monday 22 February 2016.  Please leave a way for me to contact you in case you are the lucky winner.