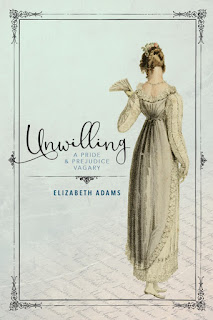 Elizabeth Adams, author of the 'Pride & Prejudice' vagary 'The Houseguest', has a new Austen-inspired book available for pre-order and she's kindly given me an excerpt to share with you!

In 'Pride and Prejudice' Mr Bennet hasn't been especially prudent with his money. Mrs Bennet's fears for her daughters' financial futures were legitimate, but Mr Bennet was pretty sanguine about the situation, and as things turned out, it never became an issue, as not one but two of his daughters married extremely well, thus providing for the future financial security of Mrs Bennet and any unmarried sisters. A scenario where Mr Bennet's health is more precarious is well worth exploring, as it could hugely change the direction of the story. 'Unwilling' is a forced marriage scenario, where Elizabeth ends up having to marry to save her family.

Mrs. Bennet was in a predicament. Her husband had been lovely of late. Indeed, since the winter, he had been kinder and more solicitous of her needs. She found that she enjoyed his quiet company in the evening when he would sit near the fire with a book while she embroidered. He had ceased mocking her with his high-minded jokes that she did not understand. Even Mrs. Bennet knew when she was being mocked, regardless of whether or not she understood the joke itself. His company had been pleasant, his behavior had been amenable, and they had taken several ambling walks along the shore, often at sundown in what she believed was her most flattering light.

Just two nights ago, she was sure he had looked at her with the same softness in his eyes he had used when they were young and newly married. At the time, she was flustered and blushed and continued on with the conversation they were having about their daughters, but it had unnerved her. That night, she had waited for her husband in her chambers, sure he would come to her. She had worn her most flattering nightgown and left her nightcap off, her still bright hair cascading over one shoulder and curling at the ends. But he had not come. Her candle had burned low and she had eventually realized that the door between their chambers was to remain closed. With a sadness she had not expected, she put out her light and went to sleep.

No one could blame her for being a trifle aloof the next day, nor for refusing her husband when he asked her to accompany him on a walk. She avoided him the whole of the day and the following one as well, until she found herself, quite to her surprise, missing his company. And so she joined him for a walk along the beach after dinner, as she had prior to her upset.

Now here she was, brushing her hair out and wishing her husband would come to her but surprised at wishing it. It had been years since they had engaged in such activities, but it was not as if they were in their dotage. She would not be forty until October and she fancied herself still an attractive woman.

He should be happy to be received by her! Mrs. Goulding wasn’t half as pretty and a good five years older, and Mrs. Bennet knew for a fact that her husband still visited her regularly. And her sister Phillips, two years her senior, received her husband almost nightly, if her complaints were to be believed. Surely she was a great deal more attractive than either of them! And Mrs. Long! She was over fifty if she was a day! Mrs. Bennet still had beautiful hair and color in her cheeks. Mr. Bennet should appreciate what he had and show his wife the respect she deserved, or at least her beauty deserved.

And so Mrs. Bennet went back and forth between indignation and attraction, wishing her husband would arrive and berating him for not coming. At one point she talked herself into believing that he was showing her respect by not coming to her. After all, everyone knew it was dreadfully unpleasant and only something to be put up with by a dutiful wife. But, after she had decided he was being most kind in not importuning her, she felt a niggling doubt in her mind, in the place she tried to ignore as much as possible, telling her that she really did want him to come, at least for a little while.

Deciding it was better to feel flattered by his respect for her in not coming, and knowing she would be equally flattered by his unconquerable desire if he did, she climbed into bed but left her hair down, just in case.

Mr. Bennet discovers his days are numbered, so he immediately begins to set his affairs — and his five unmarried daughters — in order. Knowing they will fare best should at least one of them find a suitable husband, he cannot refuse any respectable suitors.

The high-spirited Elizabeth suspects something isn’t right in the halls of Longbourn, but nothing prepares her for a certain haughty gentleman from Derbyshire. While Mr. Darcy is exceedingly wealthy and handsome, in Elizabeth’s opinion, he is also proud, high-handed, and insulting. And unfortunately, desperately in love with her.

Suddenly, Elizabeth is forced to rethink her previous opinions. And accept a choice she never had the chance to make.

Buy Links:
Unwilling is available to pre-order as an ebook (Amazon US / Amazon UK), and a paperback copy will become available for order around the publishing date, which is right at the beginning of April.


I don't know about you, but I love a forced marriage scenario! You usually get so much page time with the couple together, and often get some sparks flying! From the blurb it seems as though all of Mr Bennet's family will feel the effects of his health, as he begins to put his unfinished business in order. I'm curious to see the other changes he makes. Sometimes Mrs Bennet is portrayed as somewhat of a two-dimensional character in Austenesque stories, so I appreciated seeing this scene from her point of view. If you'd like to read another excerpt of this story there is one over at Austen Authors, featuring our newly engaged couple. 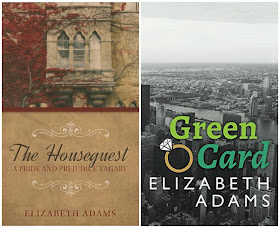 I haven't yet read 'The Houseguest', Elizabeth Adams' other P&P inspired book, but I have read another of her stories, 'Green Card', which is a non-Austenesque modern story of a marriage of convenience that I thoroughly enjoyed, so I am looking forward to reading another of her stories. I hope to read 'Unwilling' very soon, and I'll be sure to let you know what I think of it!
Ceri at 23:06
Share