Darcy vs. Bennet by Victoria Kincaid - a Review 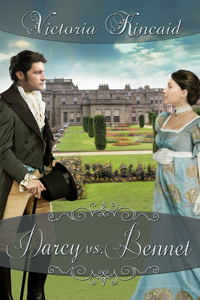 I was very interested to hear about Victoria Kincaid’s latest ‘Pride & Prejudice’ variation, 'Darcy vs. Bennet', hearing that it had a touch of the Romeo and Juliet about it. Assured of a happy ending, I was pleased to give it a go!

Mr Darcy and Elizabeth first meet at a masquerade and it’s a case of love at first sight. Mr Darcy here is not the master of Pemberley and hence the master of his own destiny. His father is very much alive and a very difficult man. Darcy doesn’t wish to marry his cousin Anne, and has been given three years during which he is expected to find a suitable wife. But the problem is, all the ladies he meets are very much the same, until he meets and converses with a lady he only knows as Elizabeth:

‘He found himself envisioning a future with this woman although he knew nothing of her family or situation. Her family might be objectionable, or she might already be promised in marriage.’

Elizabeth wasn’t invited to the masquerade; she was staying with a neighbour of the family holding the event, and her friend was determined to infiltrate the ball hoping for a dance with the eldest son of the family. Being abandoned by her friend, Elizabeth meets ‘Will’, whom she likes very much:

‘What she could see of his face suggested he was quite handsome. He was gentlemanly and solicitous in his manners. But what most struck Elizabeth was that the conversation between them flowed so effortlessly; it was as if they had known each other for years rather than minutes.’

Elizabeth later finds out Darcy’s name and realises that he is a member of the Darcy family from Derbyshire. Her father has been wronged by Mr Darcy senior in a very real and lasting way so Elizabeth knows that there is absolutely no possibility of a future in a relationship with Darcy. She doesn’t think she will ever see him again, but lo and behold; when Mr Bingley comes to Meryton he brings with him his friend, Mr Darcy, who accompanies him to the Meryton Assembly.

‘He was here. There was no doubt it was him. In the two years since the masquerade ball, he had constantly invaded her thoughts. She could not help comparing every man she encountered to “William”.’

Darcy recognises his ‘Elizabeth’ as one of Mr Bennet’s daughters. Although he is overjoyed to find her, there is a spy in their midst. Mr Hurst is one of Mr Darcy senior’s friends, and if Fitzwilliam shows any interest in these ladies it will be reported. The elder Mr Darcy is of a vindictive disposition, so things must be kept very strictly secret for Elizabeth’s own safety. Therefore, the man to whom any disguise must be thought abhorrent has to conceal his true feelings:

‘He must avoid even the slightest hint of partiality toward Elizabeth. Anything he said would be repeated to his father.

“You are dancing with the only pretty woman in the room.” Darcy hoped he could be forgiven for uttering such sacrilege.’

Mr Darcy senior is a truly awful character. Luckily he is off-page for much of the novel because he’s just so horrible, a real villainous character with no redeeming features! He is very controlling too, and it’s an unusual change in a variation, because Darcy is stripped of so much of his power. This is one of his defining features. He is the man who, in P&P, Elizabeth talks about using the following words:

“I do not know any body who seems more to enjoy the power of doing what he likes than Mr. Darcy” ‘Pride & Prejudice’ by Jane Austen

This variation sees a very big change to the dynamic between Darcy and Elizabeth. In P&P the difficulties between them are all caused by themselves, their pride and prejudices and they both grow as characters. Here, there is nothing in their own characters that really change. The thing keeping them apart is the feud between their fathers. This disguise element of the story gave us a chance to see many of the things that Darcy said in ‘Pride & Prejudice’, but here he isn’t saying them in an effort to convince himself that he doesn’t admire Elizabeth, but to convince others, so that his feelings aren’t passed back to his father. This gave more of a flavour of P&P to the variation, which I liked as Darcy’s character seems quite different from canon. All his foot in mouth moments and prideful utterances are diversions from his true feelings.

One of the things I usually enjoy in this author’s stories is the humour, and this book was no exception. There were some quite funny passages relating to Darcy’s reflections and his attempts to divert attention away from his attraction to Elizabeth:

Miss Bingley looked bewildered, as well she might. Elizabeth’s hair was glorious. “It is...extremely...copious.”

There is a lot of kissing in this book. In fact, for me there was a bit too much because although when Elizabeth and Darcy first meet in this story he feels a connection to her based on her personality as well as her looks they aren’t able to talk together much in society due to the family feud. I would have liked for more of their time together alone to have been spent actually getting to know one another rather than giving in to their attraction toward each other. For me, one of the tragic aspects of ‘Romeo and Juliet’ is that their love is based primarily in their physical attraction, because they barely know one another. In real life such a marriage might well end very unhappily even without tombs and poison! However, I accept that I am probably in the small minority who might prefer more talk and less action in a romance! Please note that when I say that there are kissing scenes I mean just that, there are no sex scenes in this story, which I know is important to be sure of for some readers.
With such a villain as the elder Mr Darcy, there is plenty of excitement in the story, as Darcy is surrounded by spies and he knows that his father is ruthless in his methods. Elizabeth’s father is highly prejudiced toward Darcy, and keen to protect all his daughters from any member of the Darcy family, so there are some potentially immovable obstacles in between our dear couple and their happy ever after. It was a very entertaining journey! I enjoyed reading ‘Darcy vs. Bennet’ and I’d rate it as a four star read.

*I was provided an ebook of this story by the author for my honest review.

Book Blurb:
Elizabeth Bennet is drawn to a handsome, mysterious man she meets at a masquerade ball. However, she gives up all hope for a future with him when she learns he is the son of George Darcy, the man who ruined her father’s life. Despite her father’s demand that she avoid the younger Darcy, when he appears in Hertfordshire Elizabeth cannot stop thinking about him, or seeking him out, or welcoming his kisses….

Fitzwilliam Darcy has struggled to carve out a life independent from his father’s vindictive temperament and domineering ways, although the elder Darcy still controls the purse strings. After meeting Elizabeth Bennet, Darcy cannot imagine marrying anyone else, even though his father despises her family. More than anything he wants to make her his wife, but doing so would mean sacrificing everything else….

'Darcy vs. Bennet' is available to buy now, in e-book or paperback

If you'd like to know more about Victoria Kincaid, or her other works, check out the links below: