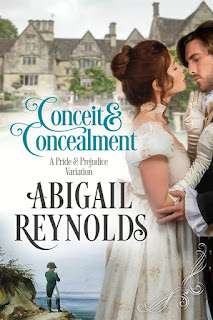 Recently author Abigail Reynolds visited my blog with a guest post and giveaway of 'Conceit & Concealment', her latest 'Pride & Prejudice' variation. I was provided with copy to read and review, so read on to see what I think of the book and whether I'd recommend adding it to your 'To Be Read' list.


Like many other people, I was very excited to hear that Abigail Reynolds had a new book out. Often her variations have a small change in the events of ‘Pride & Prejudice’, which can cause the whole story to go down a new road, but with ‘Conceit & Concealment’ it’s a change which happens before the events of ‘P&P’ begin, and one which would be very far reaching.

At the time that ‘Pride & Prejudice’ was set, Britain had been at war with France for some years. As we know, Napoleon’s army successfully invaded many places and in this change from canon, Britain has been successfully invaded and is now occupied by the French. Obviously this would have had an effect on every Briton, but how specifically might it affect the story of Miss Elizabeth Bennet and Mr Darcy?

Well, firstly the French have requisitioned property and wealth from many of the gentry. The Bennets are lucky enough to be living at Longbourn, but that is after being evicted and only returned due to Lydia allying herself with an officer; Lydia’s liking for officers actually had the effect of saving her family rather than endangering them in these circumstances!

What of the Bennets’ other daughters? With huge difficulties in being able to deny the French soldiers anything that they may take a liking to Mr Bennet initially sent his eldest daughters away, but since their return has had to take drastic measures to protect beautiful Jane from being forced into marriage. Elizabeth has so far managed not to excite too much interest, partly due to her frigid manner towards them. Elizabeth heartily hates the French invaders, and despises those landowners who have welcomed the French in order to keep their estates.

Now, just such a man has entered the neighbourhood. Mr Bingley (who has been allowed to keep his fortune as it was derived honourably from trade) has come to stay at Netherfield with a member of the landed gentry, Mr Darcy, and that gentleman’s sister, who he never allows far from his side. In Elizabeth’s eyes Darcy is a traitor, so it’s unfortunate that, as she begins to know him, she finds that he has many admirable qualities.


‘It simply wasn’t fair. Elizabeth did not want to like Mr. Darcy. How could she like a man who put his own wealth and possessions before his love of his country? True, he had been far from the only man to do so, but she was prepared to hate every last one of them.’

But the man who may have said in other circumstances “disguise of every sort is my abhorrence” is keeping a very big secret and putting up a false front.  Although Darcy appears to be a supporter of the French in fact he is nothing of the sort and has had to subjugate his feelings for the good of his country.


‘He had plenty of practice at false stories, after all. Once upon a time, disguise of every sort had been his abhorrence. Now he could hardly recall when he had not worn a disguise.’

It’s easy enough for Elizabeth to say what she’d do if she were a man and able to do something against the French when she’s in the comfort of her home. But when push comes to shove, what would she be willing to sacrifice for the good of her country?

This was such a departure from the usual. Elizabeth was prejudiced against Darcy, but for entirely different reasons than usual. As in canon, she also makes misjudgements on character, failing to see beyond the black and white of somebody’s character and realising that there are shades. So in P&P she learns that a proud person isn’t necessarily cast in one mould, and in this she learns that enemies can have good characteristics just as countrymen can have negatives. I liked that she still made this development. Darcy had less pride, or rather, he’d had to subjugate his pride, as many men of his class would look on him as a traitor, but he had selflessly put the needs of others such as his sister and his tenants before his own since taking on guardianship of Georgiana and the management of the Pemberley estate from his father and was ready to sacrifice his whole future for it.


‘Sometimes he wondered if a clean death in battle would not have been preferable. But Georgiana needed him, so that was not an option.’

I am not always a big fan of high drama, I have to be in the mood for it as I don’t like things to stretch believability too much, but the fact that this book has a bit of a ‘Résistance’ theme to it makes high drama much more realistic than in a more normalised setting. Abigail visited my blog recently with a post regarding ‘the black moment’, a moment to add drama and excitement to a story. This one has one of these moments, and then one that I found much worse, although I trusted that Abigail would bring things to a satisfactory conclusion.

But what about the romance, I hear you ask? And page time together for Darcy and Elizabeth? Well, their meeting was absolutely adorable (before she knew who he was), and I loved how they both fought their feelings for each other, though for different reasons. There is quite a bit of action in this story, so in places it felt Heyer-ish rather than Austen-ish, due to the difference in action levels and type. There are no sex scenes in this book, but being an Abigail Reynolds book there is plenty of romance, with a bit of heat to it. As the action moves from Hertfordshire to London both of our main characters get a lot of time together, which I enjoyed.

There are some good new characters too, such as Darcy’s aunt (not Lady Catherine, Colonel Fitzwilliam’s mother) and a brother. I also enjoyed the inclusion of some historical characters. There is an Author's Note at the end which puts some historical context around the story, which I always like. Do not skip ahead and read this though, as it contains spoilers, there's a reason it's at the end!

I was a little surprised by how many people got let in on Darcy’s big secret though, which had been known by barely any people for years and once he told one person it seemed that everybody was finding out. Having said that though, it wasn’t out of place with events happening around the characters.

Would I recommend this book? Absolutely. I really enjoyed it and read it in one sitting. It gets five stars from me.

*Disclaimer: I received a review copy of this book from the author, for my honest review.

You can buy ‘Conceit & Concealment’ now at Amazon US / Amazon UK  and other places.

Also, Sourcebooks, which publish some of Abigail Reynolds’ ‘Pemberley Variations’ books, is having a summer sale that includes some of her titles, so if your kindle is light on books by Abigail now is the time to bag some bargains. I think only two of them are reduced in the UK, but in the US there seem to be more which have dropped in price. Details can be found on Sourcebooks website, scroll to the bottom of the page for details.


US readers, you can enter a giveaway on Goodreads for a paperback of the book - enter by 5 July.